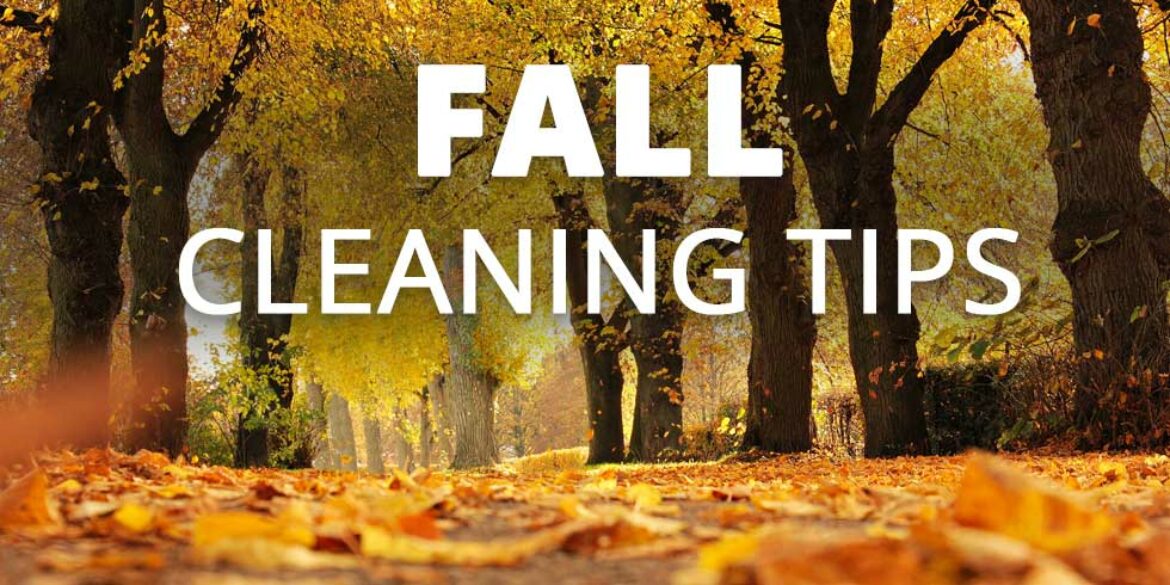 Fall is here with pumpkins in the fields and bright colors everywhere. It’s also time for the annual Fall clean. With winter on the way, it’s time to start preparing now while you can. If you’ve got any exterior wood or composite structures you need to ensure they’re well protected for the colder months ahead. This time is also good for other deep cleaning chores that will get your home fresh and comfortable for the coming months.

Our Fall cleaning list and tips will help you make the most out of it and prepare for the coming winter.

Start by going through all your cupboards and shelves in search of stale food that can be thrown out. This is a chance as well to clean the areas where you store food. Begin by taking out all your cans and boxes and cleaning away any dust that has accumulated. When you’re putting everything back check each item and throw out the ones you don’t need or have passed their expiry date.

Test and Clean Your Smoke Detectors

The safety of your home and family depends on these devices so ensure that they’re worked properly. The batteries should be replaced with fresh ones at least once a year, a good to remember when this should be done is by doing it on Daylight Savings Time. The devices themselves though also need to be cleaned as dust can build up and cause them to underperform. Use your vacuum cleansers soft brush attachment to clean in and around the detectors openings.

It’s good to also make this an annual chore every Daylight Savings Time. Flip your mattress around to prevent body impressions from causing it to slump. Sprinkle the mattress with baking soda to neutralize odors and then vacuum it up.

This should be done at a minimum once a year. Thanksgiving and Christmas are just around the corner so you’ll want your carpet in top shape for those events. It’s well worth hiring contractors for a professional clean, they’ve got the equipment and expertise to achieve results not possible with store bought chemicals. However, if this is not in your budget you can still get a good job done by renting a carpet cleaning and following some DIY tricks.

If you’ve got a wooden patio, deck or seating you need to ensure they’re protected for the colder months ahead. Start with a thorough cleaning of the wood surfaces to remove any dirt. Try to keep any wet leaves off your deck as they can cause discoloration and water damage. What sort of varnish you apply depends on what type of wood you have so make sure you know which one does what. At a minimum, you should apply two coats for best protection.

If you have any concrete footpaths, patios or driveways you need to protect them from freezing. Without protection moisture, any moisture in any crevices can freeze and cause cracking. Get a good concrete sealant and apply it correctly. This not only protects against cracking but also prevents it from aging more rapidly.

Foreclosures down for 7th straight month

NEW YORK (CNNMoney) — The number of foreclosure filings issued in April plunged 34% from a year ago — the seventh straight month of declines.

And there were just 69,532 homes repossessed last month, a 32% fall from the peak last September just before the eruption of the “robo-signing” scandal, in which banks were found to be mishandling the foreclosure process.

Will the seeming good news continue? No way, said Rick Sharga of RealtyTrac, which issued the latest monthly figures on Thursday.

Even with the drop, there were nearly 220,000 foreclosure filings during the month, including notices of default, scheduled auctions and bank repossessions.

And there are 3.7 million borrowers at least 90 days late on payments. Normally a large percentage of them would already be in foreclosure. They are not — for two reasons.

One is that ongoing regulatory issues. Banks want to make sure their procedures are all in place.

Second, the banks have already saturated many markets with repossessions they’ve put back on the market.(“Best shrinking places to live”)

On the other hand, there are a couple of reasons to believe the conditions may be improving. Hiring has picked up, enabling some borrowers to resume paying their bills.

Banks are also doing more to keep borrowers in their homes. In March, banks completed 77,000 mortgage modifications without government assistance, according to Hope Now, a coalition of mortgage servicers, investors and private counselors. That was 26% more than in February.

“What’s important,” said Faith Schwartz, the head of Hope Now, “is that these modifications are much more affordable. They should perform much better.”

Home prices, however, continue to erode. That’s a problem because it pushes more borrowers “underwater,” with home loans worth more than the value of their homes. (“6 cities with falling home prices”)

That removes an important financial cushion should the borrower run into financial problems. And it given incentive to “strategically default,” or walk away from their homes and mortgage payments.

The percentage of underwater owners of single-family homes has now reached 28.4%, according to real estate web site Zillow. That will worsen if home prices fall further.

“Home value declines are currently equal to those we experienced during the darkest days of the housing recession,” said Zillow Chief Economist Stan Humphries. “That’s going to put more homeowners in default.”

Home prices have fallen so fast lately that Humphries changed his 2011 outlook, forecasting a 7% to 9% price drop for the year, up from 5% to 7%.

Bottom line is that the crisis could last for years, according to Sharga. It could be 2014 before the housing market returns to a more normal condition.

NEW YORK (CNNMoney) — For the first time in years, buying a home may beat renting.

Two factors are at play, according to researchers who recently crunched the numbers, Ken Johnson of Florida International University and Eli Beracha of East Carolina University for a paper to be published in Real Estate Economics.

First, rents, though mostly stagnant the past few years, are expected to head higher as more people bitten by the housing bust turn to renting. Rents could rise 7% in each of the next two years, according to Peggy Alford, president of Rent.com.

Second, home prices have finally dropped enough to create a buying opportunity. Nationally, prices are down 32% from their peak, set in 2006.

The net result is that home price gains would need to average only 3.25% annually to beat renting, according to Beracha and Johnson. To make the math work, you have to stay in the home for at least eight years. (Buy or rent? 10 cities rated)

Renting has usually come out ahead, they say. Buying typically leads to higher monthly and annual bills once all costs are factored in — mortgage payments, property taxes, maintenance and transactional costs.

Those higher costs can be offset if the home gains in value. But renters — the researchers assume — can invest the savings. And that is a big part of why the professors say renting has typically been the better deal. “I was shocked at how often renters won,” said Johnson.

Another reason had been the push to homeownership, which resulted in a premium on home values. “My dad always told me not to ‘throw my money away on rent,'” said Johnson. “This mania toward homeownership tends to drive prices up.”

How much better buying will be depends on location. Of the 23 cities Beracha and Johnson looked at, Seattle is the best place to buy right now. When renters invest in portfolios that include stocks, the appreciation rate required over the next eight years there is 4.84% and the area’s historical average is 6.06%.

For several cities, including New York, Boston and Dallas, renting is still preferable. In New York, for example, homeowners would need a 7% annual rise in home values to beat renters. (See “Fastest growing cities in the South“)

Buyers should beware the assumption that home prices will rebound, even from these depressed levels, said Dean Baker, co-director of the Center for Economic and Policy Research.

Hiring has been slow and there are tons of potential foreclosures that could flood the market with distressed homes, depressing prices.

Even in cities where people are, theoretically, better off renting, they may not be in reality. Paying off a mortgage is a forced savings plan, said Baker. The mortgage bill comes in every month, the homeowner pays it and the mortgage balance goes down.

Renters, meanwhile, are just as likely to spend their savings. They’ll wind up with less money than homeowners, which is kind of what your dad was saying all along.

Home sales are expected to stay on an uptrend through 2012, although the performance will be uneven with mortgage constraints weighing on the market, according to experts at a residential real estate forum today at the REALTORS® Midyear Legislative Meetings & Trade Expo here.
Lawrence Yun, NAR chief economist, said existing-home sales have been underperforming by historical standards and will rise gradually but unevenly. “If we just hold at the first-quarter sales pace of 5.1 million, sales this year would rise 4 percent, but the remainder of the year looks better,” Yun said. “We expect 5.3 million existing-home sales this year, up from 4.9 million in 2010, with additional gains in 2012 to about 5.6 million — that’s a sustainable level given the size of our population.”
Mortgage interest rates should rise gradually to 5.5 percent by the end of the year and average 6.0 percent in 2012 — still relatively affordable by historic standards.

Those thinking that it is still a “Buyers Market” seem to think that National reports on falling prices applies to all markets–not so! In many markets, prices are slowly inching up and if a buyer doesn’t step up and pay the price, someone else will surely do it!

THE FACTS: Prices have stabilized in many segments of the real estate market and are starting to shift upwards….Inventories are narrowing as prices have reached the lowest levels in years and sales took an upward trend in many markets. The older, more distressed houses that are selling right now are those that have been priced at the lowest levels in order to move them. It is working, and smart investors are fearless when it comes to buying these homes–the potential is tremendous for new development in these properties….builders are buying these homes, sometimes in multiples, in order to be in a postion to build when the market normalizes. The areas that are still suffering are those feeling the after-effects of foreclosure–healing in these areas has been stifled by the negative affects on prices of neighboring properties